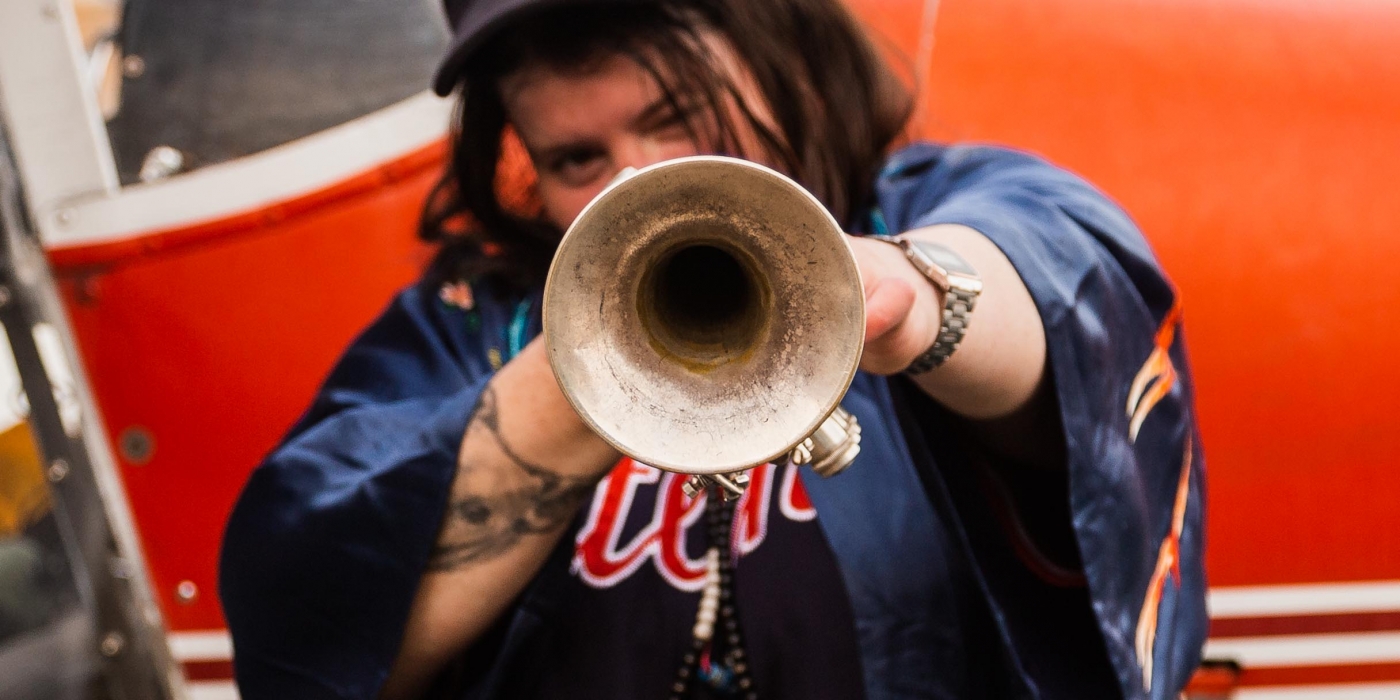 FLY or DIE II: bird dogs of paradise is the much-anticipated follow-up to composer, trumpeter, and (now) singer jaimie branch's debut Fly or Die, which was dubbed one of the “Best Albums of
2017” by The New York Times, Los Angeles Times, NPR Music, WIRE, Stereogum, Aquarium Drunkard, and more. Written (mostly) while on her first European tour with Fly or Die in
November 2018; and recorded (mostly) in studio at Total Refreshment Centre and live at Café OTO in London UK at the end of that tour, bird dogs of paradise is the result of a never-satisfied Branch pushing her distinct style of progressive composition to new heights — while also stepping forward as a vocalist for the first time. “So much beauty lies in the abstract of instrumental music,” says branch in the album’s liner notes, “but being this ain’t a particularly beautiful time, I’ve chosen a more literal path. The voice is good for that.”
On the album’s epic opening opus “prayer for amerikkka pt.1 and 2” branch calls out “a bunch of wide-eyed racists” between searing trumpet ad libs atop a massive, down-tuned blues.
On the album’s closing track “love song (for assholes & clowns)” she laughs in their faces - an unhinged, unflinching, mix of anger and humor paired with a classic shuffle beat. Between both ends is an instrumental chronicle that traverses a deep sea of dystopian Americana without trepidation.
Her trumpet – sometimes soft and pleading and other times brash and seething – is always at the helm. Branch and company are on a quest for sonic saturation here and they conjure up moments
of real reckoning - hopefulness, hopelessness, danger, and joy. A cinematic sojourn from our earth to imagined worlds above, bird dogs of paradise dares you to feel again, or as branch says, “now
sound the trumpets and get ready to roll.”
No later than on 3 June, Jaimie Branch was awarded the "Deutscher Jazzpreis" in the category "International Wind Instruments".

Drummer/composer Greg Smith GS has been active on the international jazz, world music, and beat-music scene since the mid 1990s. His chameleon-esque ability has led him to perform and record with artists as diverse as David Binney, Chris Speed, Reggie Washington, Sandra St-Victory & Family Stand, Kori Withers (daughter of Bill Withers), and the Lama Trio.
In 2018 he formed Greg Smith GS, a group featuring the fantastic lineup of David Binney, Vanja Kevresan, Alex Maksymiw, and Logan Kane, with original compositions by Smith.
They played a few concerts in the Benelux/Germany area, and recorded an album in 2020 at Studio Greve in Berlin.
The album is called *Cluster 001*, and it was released via NYC label Brooklyn Jazz Underground Records. It has garnered very positive reviews from magazines, newspapers, and radio from around the World.
Now in 2021, after 18 months of pandemic hiatus, the group is getting ready to perform again as a quartet. The quartet sound features an extra layer of electronics from Smith’s Roland Sampler and Octapad (Smith is a sponsored Roland artist), which ensures that the magic of the electro sound and vibe of the album is well-represented on stage.

'For this performance, Smith is bringing the two guitarists from the album *Cluster 001*, and on electric bass is the Canadian Zach Lober, who now resides in the Netherlands but was a fixture on the NYC-scene for two decades’.