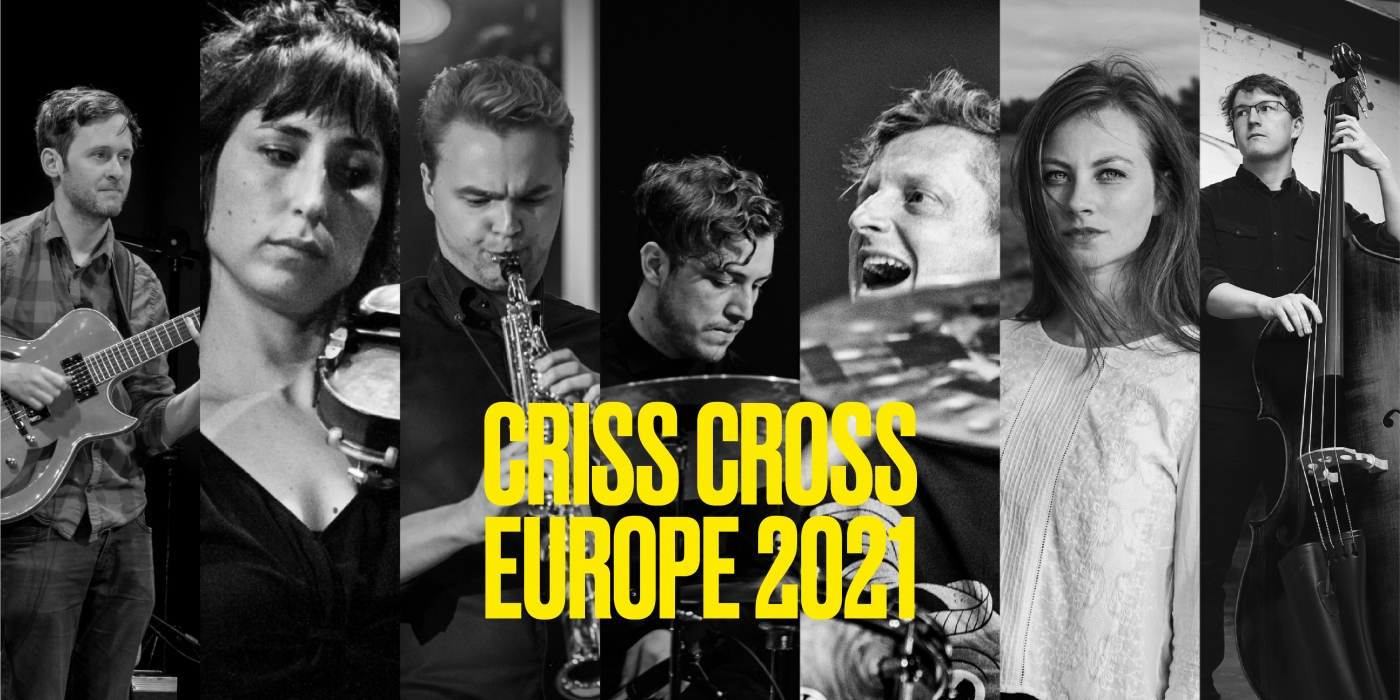 Each year, Criss Cross Europe brings together 6 promising young jazz and impro musicians from 6 European countries to form a pan-European band. During the residency period these musicians work together, guided by experts and an artistic coach – a flag-bearer of the European jazz scene. This year, that coach is Berlin-based American drummer Jim Black, one of the most influential voices in contemporary jazz.  Throughout the residencies the partners meet to investigate the ingredients that help build international music careers.
The residency is concluded by a concert tour that takes the band to prominent venues and festivals in the 6 partner countries: Estonia, Ireland, Scotland, Belgium, Luxembourg and the Netherlands.

Coach Jim Black, who came to the forefront of the new generation of jazz innovators in projects like Human Feel, Tim Berne's Bloodcount, Ellery Eskelin's trio, Pachora, and Dave Douglas' Tiny Bell Trio, is internationally acknowledged for his virtuosic but highly personal approach to contemporary jazz. Black picked out an intriguing selection of musicians for ‘his’ Criss Cross Europe band.

Nabou Claerhout took a brave and unusual leap to learn to play the trombone at the age of 9. Nobody could have imagined then that, years later, she would land in the middle of the contemporary jazz scene. Today, Nabou is one of the most promising and innovative jazz trombonists of the Benelux. With Fred Wesley and Mark Guiliana in mind, the young Nabou went from Kunsthumaniora Brussel to Codarts Rotterdam, with among others Bart Van Lier and Ilja Reingoud as her teachers. From an early age onwards, Nabou got the chance to play together with internationally renowned artists like Bert Joris, John Ruocco, Dave Holland, Dave Douglas, Evan Parker, Martin Fondsen, Jules Buckley, Jeroen Van Herzele, Andy Hunter, Bert Boeren, Akua Naru etc. After a stop at the Royal Academy of Music in London (2017), Nabou graduated from Codarts in 2018. Since then, she has been teaching at the Kortrijk Conservatory and Wilrijk music academies, and has been working as a researcher at the Arts & Research Institute in Antwerp since September 2021.

Chris Guilfoyle is an Irish guitarist, composer, bandleader, and educator currently based in Dublin. After completing his BA in Jazz Performance at Newpark Music Centre, Dublin in 2010, he went on to receive a Masters Degree in Music Performance from Lucerne University, Switzerland in 2014
Over the last 10 years, Chris has toured regularly around Ireland and abroad including the UK, The Netherlands, Belgium and France. Since 2011, Chris has been a member of faculty on Newpark Music Centre’s BA in Jazz Performance program, and has since become a Jazz Lecturer at Dublin City University where he teaches guitar and ensemble studies. He is also a founding member of the Dublin Jazz Co-op, a collective of Irish jazz musicians putting on weekly gigs in the Workman's Club, Dublin. Chris leads his own group Umbra, a critically acclaimed quintet featuring some of the most promising musicians in Ireland. Umbra have released two records in the last two years and have toured extensively in Ireland and Europe. In his relatively short career, Chris has played with some of the biggest names in jazz including Dave Liebman, Jim Black, Tom Rainey, Theo Bleckmann, Nils Wogram, Ralph Peterson, John O'Gallagher and David Binney and also performs with Ronan Guilfoyle, Conor Guilfoyle, Sean Carpio and Michael Buckley, some of the most highly regarded

Drummer Michel Meis belongs to the new generation of Luxembourgish jazz musicians. He studied jazz drums with Oliver Strauch and Georg Ruby at the Hochschule für Musik Saar (Saarbrücken, Germany) and regularly proves his versatility and openness through numerous projects. Besides his own jazz project, the Michel Meis 4tet, he played for a long time with Dock in Absolute (pop/jazz) and currently plays with Everwaiting Serenade (melodic hardcore), Kleinkram (jazz), the Gilles Grethen Quartet (jazz) and the duo Blankx with pianist Manuel Krass (free jazz/electro). Meis played live in clubs and at festivals in Luxembourg, Germany, Belgium, France, the Netherlands, Italy, Hungary, Ukraine, Romania, China and Japan. With his 4tet, he released his debut album “Lost in Translation” in January 2019 in the series “Jazz thing Next Generation” on Double Moon/Challenge Records – a first for a Luxembourgish artist.

Singer, composer and improvisor Sanne Rambags moves listeners in her own deliberate, very personal way. She uses her voice to express her deepest feelings freely, with no boundaries, interacting with her fellow musicians. Rambags sometimes has to pinch herself to make sure it’s all really happening: playing fabulous concerts all over the world, sharing stages with people who were once her idols but are now her colleagues. Audiences everywhere particularly respond to – and are moved by – Rambags’ wordless vocals. Rambags not only believed in her dream, she did everything she could to realize it. She took initiatives and risks, and learned from experienced and inspiring musicians. By exposing herself, she was seen, for example, by Martin Fondse – conductor and artistic director of the National Youth Jazz Orchestra of the Netherlands (2015-2017). In the interim, she completed a Bachelor of Music in Jazz Studies (Vocal Performance) at the Academy of Music and Performing Arts in Tilburg (2017). During her studies, Rambags discovered the music of singer Susanne Abbuehl and later studied under her in Lucerne. In the youth orchestra and in the trio she formed with drummer Joost Lijbaart and guitarist Bram Stadhouders, Rambags put the lessons she had learned straight into practice in Europe, Africa, South America and Asia. She released an album with this trio in 2017: Under The Surface, a recording of free improvisations, sometimes based on Rambags’ original poetry. Singing her own lyrics (written in English) Rambags works with several groups, including the trio Mudita whose other members are pianist Sjoerd van Eijck and trumpeter Koen Smits. She also composes for Mudita, the album Listen To The Sound Of The Forest being an example. Rambags also performs solo as a singer-songwriter, accompanying herself on guitar. Rambags’ vocals are reminiscent of Susanne Abbuehl, Simin Tander and Mari Boine each of whom –in their own way – uses more sounds in their improvisations than is usual in scat singing. As a singer-songwriter, Rambags looked most of all to Joni Mitchell. Rambags has drawn inspiration from all of these women; now it’s her turn to be inspiring. She doesn’t have to convince anyone, she just has to let it happen: by herself, from her inner self, in interaction and, most of all, in the hearts of her listeners.

Aleksander Paal is a demanded jazz saxophonist who is currently working as a performer, composer and educator in Tallinn, Estonia. Initially starting with classical piano at age 7 he switched to saxophone and discovered jazz music at age 10. During his early years Paal participated in numerous local saxophone competitions, both classical and jazz oriented, and managed to win some of them. Most notably in 2012 he got the 1st prize in the Northern European Jazz Talent Contest in Groningen, Netherlands. Aleksander has studied jazz music at the Estonian Academy of Music and Theatre (2008-2014) and at the University of Music Franz Liszt Weimar in Germany (2010). During his studies he took part in many international workshops, most notably attended the IASJ meeting in the Hague in 2010. Nowadays he has become a sought-after improviser in the jazz idiom. Knowing his way around different styles of music (including free jazz, contemporary free improvisation, pop, funk, R&B and more) is definitely one of the strongest sides of Paal's playing. Back in 2016 Aleksander was a lead alto player in an international project called Euroradio Jazz Orchestra which took place in Scotland and was conducted by Tommy Smith. In 2018 Paal was among few musicians who were comissioned to compose a symphonic jazz piece for a large orchestra with a jazz rhythm section. The work was done together with Raul Sööt and got premiered later in November, celebrating 100 years of Estonia. Besides leading his own groups (one quartet and two trios) Aleksander plays lead alto in Estonian Dream Big Band and New Wind Jazz Orchestra. As a sideman he has played and recorded with various local groups such as S.P.A.R. Quartet, Trading Fives, Jason Hunter Quintet, Sofia Rubina Band and more. Paal teaches at the Estonian Academy of Music and Theatre since 2018.

Dawid Bowden , award-winning bass player and composer based in Glasgow, working primarily in the fields of jazz, folk and contemporary improvised music. A mainstay of the Scottish scene, David Bowden has toured the UK and Europe extensively with a variety of projects. In 2015, David won Yamaha Jazz Scholarship Award and in 2017, fresh from graduating from the Royal Conservatoire of Scotland, he was awarded the title of ‘BBC Young Scottish Jazz Musician of the Year’. David specialises in writing genre-spanning instrumental music for bespoke ensembles. He has a diverse musical palette that is reflected in his main compositional project inspired by his studies in Ghana and Amsterdam: the acclaimed world/jazz fusion ensemble ‘Mezcla’. Tying together modern jazz with influences from West Africa, Latin America and RnB music. The band has appeared at festivals across the UK and will be releasing their debut album in 2020. As a sideman, David is a member of the Fergus McCreadie Trio. The band’s acclaimed album ‘Turas’ was shortlisted for the ‘Scottish Album of the Year’ award and has followed with appearances at venues such as Edinburgh Jazz & Blues Festival, Ronnie Scott’s, Oslo and Stockholm Jazz Festivals. David is also a co-leader of the contemporary jazz quartet ‘Square One’ described as a ‘powerhouse of Scottish Jazz talent’ by BBC Radio Scotland. The band won the Peter Whittingham award 2015 and have released two albums to critical acclaim followed by a tour of the UK, Austria and Poland. David is also active outside of the Jazz scene, regularly performing with acts such as Robin Adams, Avocet, Dosca, Finn Anderson to name a few. Recent performance highlights have included festivals across the UK as well as performances in the Czech Republic, Poland, France, Belgium, Holland, Australia, Dubai and Zambia.

In Dudelange - Luxembourg, the Criss Cross Europe project is featured in a double-bill with Jim Black's own trio Melez, led by vocalist/composer Cansu Tanrıkulu, with Black on drums and Elias Stemeseder on piano. Their music is carved out of improvised sessions and sculpted into compositional figures by Tanrıkulu. Her chameleon-like vocals fuse with a “no holds barred” approach to melody and text based improvisations, making her unique as a story-teller. Drummer Jim Black is well-known for his limitless musical vocabulary and inventive craftsmanship, helping guide this trio to the apexes they so often achieve. Pianist/keyboardist Elias Stemeseder’s skilful playing, exceptional aesthetic, and confidence shapes and colours the trio in a way only he could create.