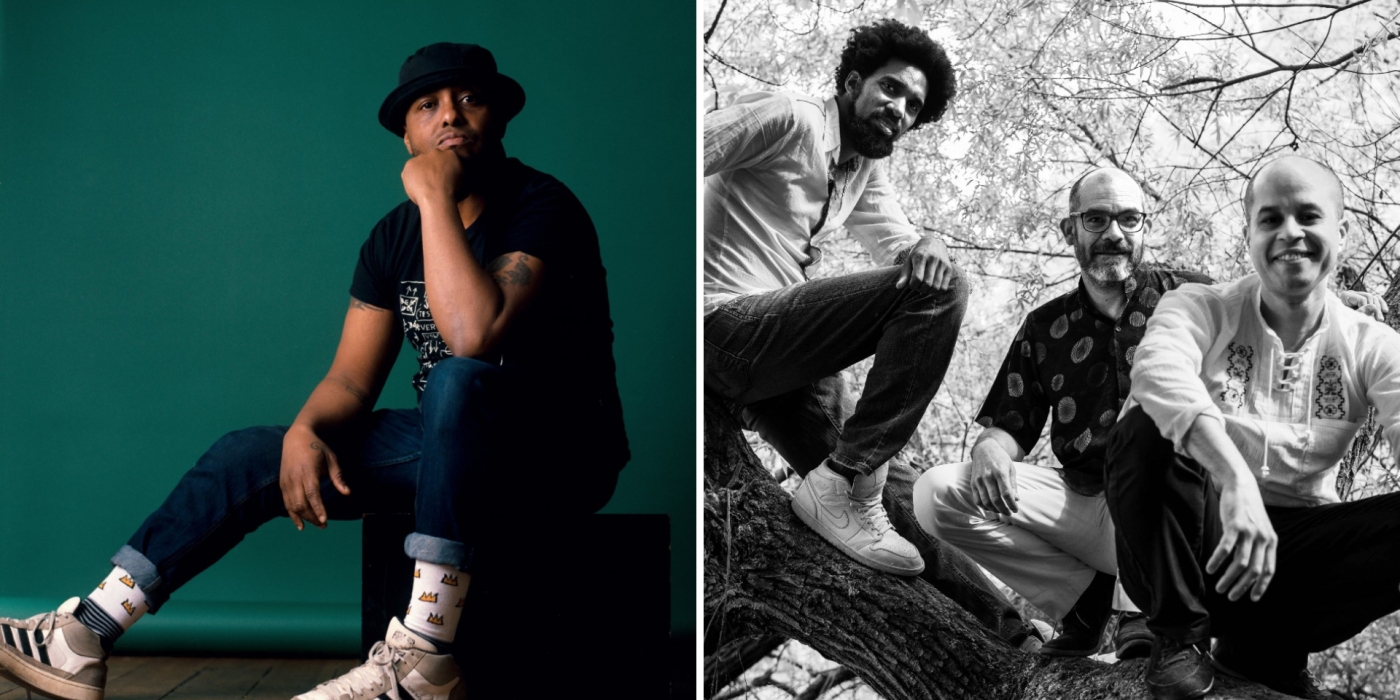 Regis Molina is a cuban musician and composer from Havana, who is based in Berlin.
Since the age of nine, when he began his classical training, his primary instrument has been the alto saxophone. Now a multiinstrumentalist, he plays the baritone saxophone, flute, clarinet and AfroCuban percussion as well.
Based on Cuban traditional rhythms and Jazz, his playing style is flexible, with strong improvisation skills in any genre, be it World Music, Reggae, Hip-Hop, Soul or Pop.
“My musical vision combines elements of many sacred musics of Nature and world cultures. When I’m playing and composing I mix the flavour of different music traditions and melt them into other sounds and vibes.“
Molina is an energetic saxophonist and band-leader. With his Quintett he also is on a quest for the spiritual values within the music.
In the Cuban culture music, dance and spirituality are interconnected to each other, principles that Molina translates to thru his music: ”You can´t really separate them from each other and I think about this in my playing and writing. I first learned hoto dance rather than to play music, so I guess that’s why I love to have a sense of ’dancing’ in my body while I’m playing. It helps me to connect and interact more with other subtle elements in the music. Then I try to make them all sound like mine. “
His passion and dedication to music has seen him receive several awards as well as share the stage and the studio in various countries with several world renowned musicians and bands.
Javier Reyes was born in Bogotá-Colombia. From 1995 -2000 studied music at the University Javeriana. The first three years of his studies Javier Reyes chose to focus on classical percussion.
After that, he switched to the jazz course that was also offered at the Javerina University. In 2000 he graduated with honors. After graduating, Javier Reyes was immediately hired as a percussion instructor at the University Javeriana and University Bosque, also in Bogotá. In 2003, the drummer went to Berlin to expand his jazz knowledge. In Berlin he studied at the Jazz Institute Berlin (Hans Eisler/UDK) where he graduated with honors in 2008 with a bachelor's degree majoring in Drums/Music of Education.
Reyes also successfully completed his Master's degree with a focus on composition the following year at the Jazz Institute Berlin. Since 2009, he has worked as a teacher of percussion and ensemble at the Jazz Institut Berlin. Since 2020 he teaches in the school music department of the UdK.
He has played Germany and worldwide with various bands: Tree-O, David Riano's Ambrodavi, Viktor Wolf's Panorama Peng, Easy Goin', Twana Rhodes, Marie Séférian Quartet (in 2009 the band won the first prize at the Berlin Jazz Award), Tobias
Morgenstern's Morgenstern vom Ipanema, Itay Dvori, and with international saxophonist Peter Weniger (performances in Montenegro, Pakistan). As a highlight, he played with
Samuel Torres (Richard Bonna, Arturo Sandoval, Lilia Downs, Shakira) and with David Gilmore (Steve Coleman, Wayne Shorter, Joss Stone).
Javier Reyes performed in 2009 with the Detroit jazz band Tribe (with great musicians such as, among others. Wendell Harrison (saxophones), Phil Randelin (trombone) and Marcus Belgrave (trumpet), among others, this last known for his work with Ray Charles) at the Jazz Festival Jazz à la Villete in Paris. In 2013, Javier has performed in the first performance of the Brazilian Bettleoper "Opera do Malandro" at the Neuköllner Oper with total success. Javier has also performed with the famous German actress and singer Katja Erbstein.
The great passion and creativity that Javier Reyes conveys in his playing is what characterizes his playing and makes him irreplaceable in any of these bands.
The Colombian bassist Sergio "Checho" Gómez has been living in Berlin for 20 years, where he came thanks to a scholarship from the Ministry of Culture and where he completed a master's degree in jazz (2002) and music education (2013) at the Berlin University of the Arts.
Parallel to his teaching activities, he plays in various projects of jazz, Latin American music, rock, world music and experimental music.
He has worked with artists such as Samuel Torres, Michael Cain, Michael Rodríguez, Peter Weniger, Nico Meinhold, Vladimir Karparov and Kenny Martin and others.

Producer and multi-instrumentalist Ben Marc (real name: Neil Charles) has emerged as a veritable key player in the London jazz scene. Among others, he has worked on Johnny Greenwood’s (Radiohead) award-winning film score for ‘The Master’ and toured with Mulatu Astatke.

On the double bass and electric bass, Ben Marc flits between jazz, classical and electronic music. His debut album ‘Glass Effect’ released in 2022 combines a wide variety of influences such as free jazz, broken beat, hip-hop and electronica. The renowned online magazine ‘Pitchfork’ writes enthusiastically of Marc’s debut album, which – despite its genre experimentation – doesn’t just sound like a skill showcase or a musical muddle, but rather maintains its integrity throughout. A longplayer with depth that also always sonorously describes Marc’s quest for peace between all the drifts and rushes and the distinctive bass.

When Ben Marc talks about his album, he likes to speak of hope and his nights in Ibiza, which prompted and inspired his debut album ‘Glass Effect’. Marc is like a colourful cloud that fully absorbs life and all its impressions. And he then shares these with his audience in a musical, playful and similarly thoughtful manner.

"Elements of jazz, improvisation and Latin American rhythms define much of the sound of the group Tree-O, which was founded by three musicians in Berlin a few years ago. Behind this was the need to create new sounds and new musical paths to connect with their musical and spiritual roots (hence the name Tree), and in turn explore new avenues within the sound of a trio. The trio format allows for more some musical freedom, but requires an extreme connection between their musicians, which is clearly the case with this Berlin-based Cuban-Colombian group. Regis Molina (alto & bari Saxophones, flute, comp.), Javier Reyes (drums & comp.) and Sergio "Checho" Gómez (bass & comp.) are the roots of this Tree-O that will provide listeners with an unforgettable musical experience."

The trio led by Regis “KinRe” Molina (alto saxophone), with Javier Reyes (drums) and Sergio "Checho" Gómez (bass) was formed in Berlin a few years ago out of a desire to explore fresh sounds and new ways to connect with their musical and spiritual roots.

Then there is the cooperation itself. Having – and also absolutely wanting – to collaborate as a trio has fostered musical freedom and the formation of an extremely close bond between the musicians. This can be heard very clearly in this Cuban-Colombian constellation.

Tree-O contributes a casual groove and balance. With harmonies reminiscent of the most enjoyable periods of South African jazz. And the best elements of jazz and soul history drawn out and interpreted so very skilfully and vividly in the present day. As if the present were helping itself to the best features of the past without any fear of the future.

After Regis “KinRe” Molina was already able to impress last year at the ‘Like A Jazz Machine’ festival, he will undoubtedly put on yet another great performance this year together with Tree-O. An unforgettable musical experience for every jazz fan.