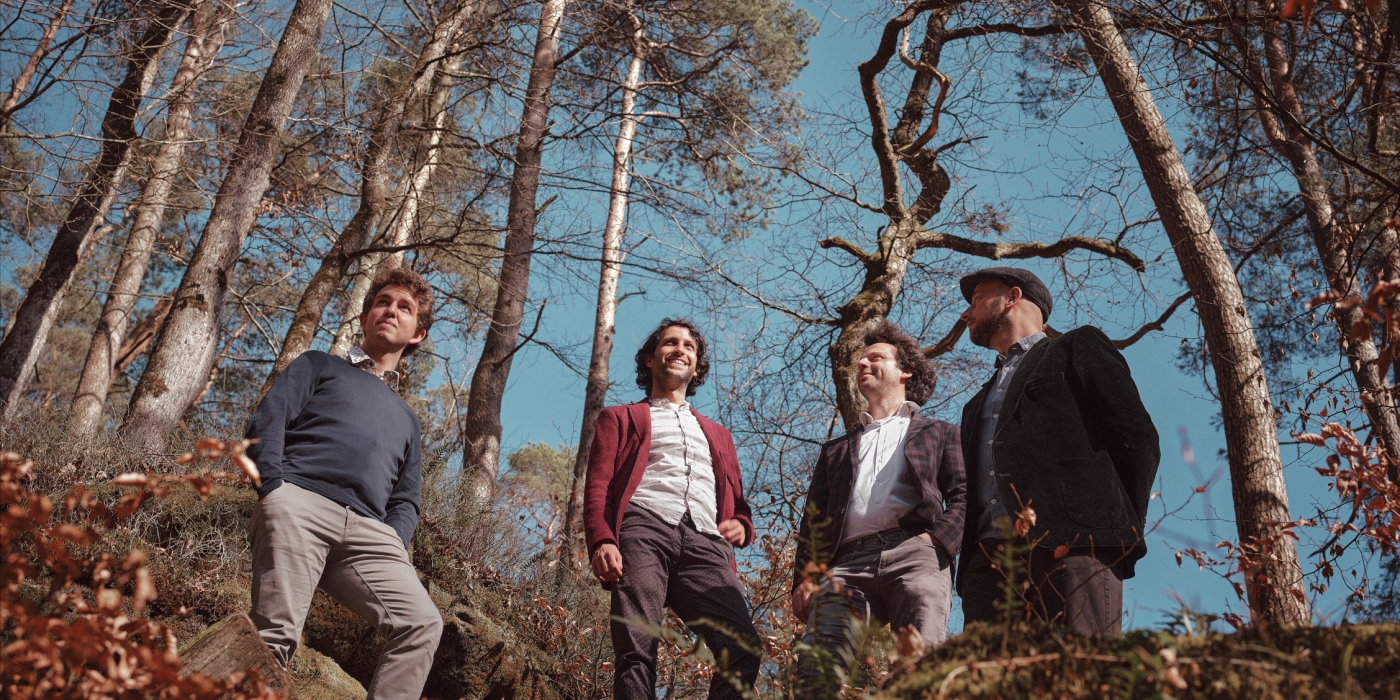 “Natural Flow“ is Arthur Possing Quartet’s second album. In this new album, as a continuity from their debut release entitled ‘Four years’, the band explores plenty of innovative and researched compositions and sounds, giving it its unique characteristics.

For this album, the quartet features the French trumpeter Thomas Mayade (Brussels Jazz Orchestra, David Linx, Electro Deluxe,...), who adds a special and unique colour to the band.  The band recorded the album in Peter Gabriel's famous Real World Studios in Box (UK), which are some of the best sounding and most acclaimed studios in the world. They house an array of the finest audio equipment ever made.

The Arthur Possing Quartet was formed in 2013. The members of the group met in highschool (music section) and soon they started to play together regularly. In 2017, the musicians are originally from Germany, France and Luxembourg and have studied at the Royal Conservatory of Brussels, at the Centre des Musiques Didier Lockwood near Paris, the Conservatorium van Amsterdam and at the Musikhochschule Mannheim. Their repertoire consists of own compositions, as well as tunes of jazzmen they really appreciate. The quartet plays modern jazz, with influences from all genres, without forgetting the tradition.

Arthur Possing is a young Luxembourgish pianist. Born in 1996, he grew up in a family, where music takes an important role and was omnipresent at home. He started classical percussion at the age of 6 and classical piano at the age of 10, later in the class of well-known pianist Jean Muller. In 2009, he began jazz piano with Marc Mangen and in 2011, vibraphone with Guy Cabay. In 2016, after finishing secondary school, he began further studies in jazz piano at the Conservatoire Royal de Bruxelles with Eric Legnini.
A passionate, insatiable and hyperactive musician, Pierre Cocq-Amann plays all over the world! He likes to combine the most diverse experiences. Since September 2015, he teaches classical saxophone, jazz and world music at the Conservatoire du Luxembourg. His music is full of surprises, he places the art of improvisation at the heart of all his musical interventions.

Sebastian "Schlapbe" Flach, a bass player who has realised his dream of making music that comes out of the belly. And he considers it an absolute privilege to be able to make a living from it.
He studied classical double bass as a preliminary student at the Musikhochschule Stuttgart 1997-2000 and jazz/folk music, electric bass and double bass at the Musikhochschule Mannheim from 2000 to 2004. Since 1999 he has been a bass teacher at the drum department in Stuttgart. He was a member of the Bundesjazzorchester under Peter Herbolzheimer, winner of the "Xavier Naidoo-Remix-Competition" (2002) and the "start-ab-Remix-Competition" of Herbert Grönemeyer and played with the "Söhne Mannheims" among others. Since 2006 he has been the bassist of Guildo Horn's band "Die orthopädischen Strümpfe" and has shared the stage with a wide range of musicians including Anastacia, Charlie Winston, Gregor Meyle, Georg Ringsgwandl, Reinhold Beckmann, Xavier Naidoo, Queen Esther Marrow, Vicky Leandros, Tictactoe, Max Mutzke, Arthur Possing, Daniel Balthasar, David Laborier, David Ascani, Nick Curly, Josh Island.... An extensive discography with renowned stars of the pop and jazz scene completes his artistic profile. His own projects include releases with the trio "tenandone" and SMAF (House band of the Pierre M Krause Show). He says he is totally happy to have been able to participate in so many different projects, allowing him to find his musical identity - expressing the joy of life.

Niels Engel's musical career started at the Conservatory of Esch-sur-Alzette in Luxembourg where he studied mainly classical music (clarinet, classical percussion, solfeggio, classical harmony, chamber music, orchestral playing and fanfare). Passionate about jazz, he studied jazz drums at the Conservatoire de Luxembourg. At the age of 16, he won the "Concours du jeune soliste européen" in Luxembourg, one year later he became a finalist in the "Concours du batteur européen" in Germany and finally at the age of 18, he obtained his drumming diploma at the Conservatoire of Esch-sur-Alzette.
Afterwards he was accepted at the Royal Conservatory of The Hague in the Netherlands, where he continued his studies with Joost Patocka, Stefan Kruger, Frits Landesbergen and Erik Ineke. In 2009 he moved to Amsterdam to complete his Bachelor's degree with Marcel Serierse and Martijn Vink at the Amsterdam Conservatory.
As a sideman he won prestigious competitions such as the "Prinses Christina Concours" and the "Grote Prijs van Nederland" in 2010, and three years later, in 2013, with the "Matiss Cudars 4tet", the famous "European Burghausen Jazz Award" in Germany. Currently he plays in various bands and groups such as the Orchestre National de Jazz de Luxembourg, Pol Belardi's Force, Marc Mangen Trio, BEAM, Ernie Hammes Group, David Ascani 4tet and more. In 2015 he started playing for "The Grund Club" where he is the reference drummer. Since 2016 he teaches drums at the Conservatory of Esch-sur-Alzette, Luxembourg.

The eleven songs were mainly composed by the band leader, while some songs were also composed by other band members, including the most intense, “Le Roi Arthur”, by Cocq-Amann. “Last year he called me and told me that he composed a song for me; that was ‘Le Roi Arthur’," Possing remembered. “The piece not only reflects my musical world, but also fits perfectly into the quartet. Of course, it also demonstrates his background and reminds you of John Coltrane without being a pale copy of his playing. It is in 7/4 time and consequently has a more modern approach that was not common at the time. At the same time, it is mixed with this energy.” Relaxed rhythmic complexity distinguishes “One Move Further”, which is based on a rhythmic idea that Sebastian and I play together,” the pianist explained. “A melodic idea develops from this, which is anticipated by the rhythm – hence the title.” The enchanting “Walk Around Etangs” shows another side of the band. It refers to my time in Brussels, where I studied,” Possing explained. “’Etangs’ is the French word for ponds, and I often went for walks along the ponds in my district.” "Golden Fields” is also among the particularly impressive songs. “That was one of the first pieces I composed for the album,” Possing remembers. “The influence of Brad Mehldau can be heard quite clearly there. I composed the piece after I saw a concert by him with his trio in Luxembourg. He embodies an aesthetic that is very close to me and that I find very important – without wanting to compare myself to him now.”
The album will be officially out on 27th August 2021, under Double Moon Records/Challenge Records. The concert release in Luxembourg will be on 24th September at opderschmelz, Dudelange."
“There is plenty of strong und subtle playing, with Possing evincing both lyrical sensitivity and, when needed, a potent yet finely judged sense of rhythmic drive. (...) All fine stuff from a quartet, which should go far" Michael Tucker, Jazz Journal (UK)